The Pittsburgh Penguins have re-signed right-winger Tom Kuhnhackl to a one-year, two-way contract, general manager Jim Rutherford said in a statement on Monday.

His renaissance was fueled by forming a productive combination with linemates Dominik Uher and Carter Rowney. The trio was frequently the AHL Penguins’ third line and played a strong two-way game.

In 2013-14, he split time between Wilkes-Barre and the Wheeling Nailers of the ECHL, scoring eight goals and two assists in 48 AHL games. His rookie campaign in 2012-13 was cut short due to a season-ending shoulder injury in December.

Kuhnhackl, a native of Landshut, Germany, was the Penguins’ fourth-round pick in the 2010 NHL draft. He had been scheduled to become a restricted free agent for the first time this offseason. 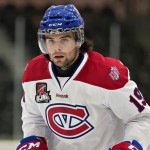 #CAWLIDGEHAWKEY: Robert Morris commit Cody Hendsbee (Kemptville-CCHL) will not be joining the team this fall. The 21-year old defenseman has instead decided to attend school at St. Francis Xavier University in Antigonish, Nova Scotia.