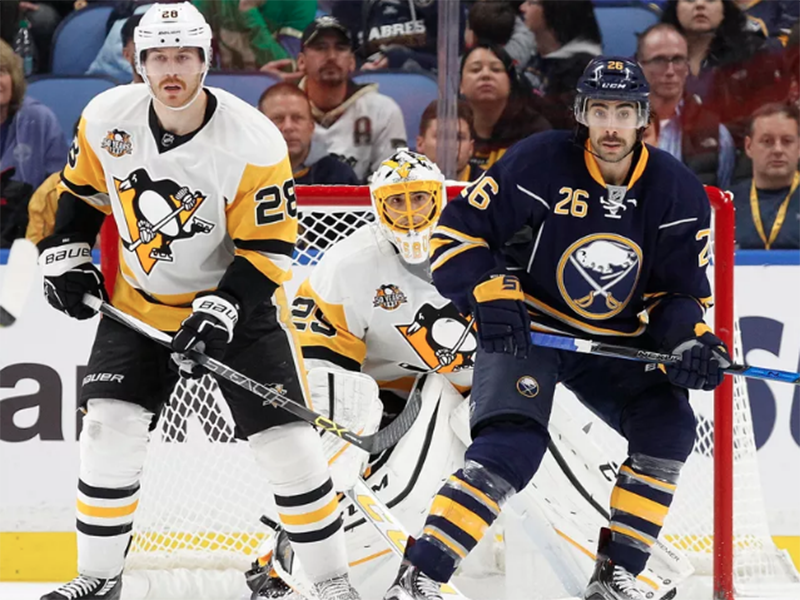 Penguins netminder Matt Murray didn’t get off to a good start, making 18 saves on 21 shots and giving up the first period three goals. Marc-Andre Fleury would eventually replace Murray and would go on to save all 28 of the next shots off of Buffalo’s sticks.

It was Fleury’s impeccable play that allowed Pittsburgh to come back and win, 4-3.

Equally impressive was the resilience of Pittsburgh’s offense and defense. Not only is it difficult to shut out a team that blasted 49 goals on net for two periods, but it is equally as hard to rebound and get four goals in those same two periods.

While the first period was one to forget for the team, the Penguins dominated — and they had to in order to win this game. Pittsburgh’s four unanswered goals were the result of all sides on the ice working together and getting the job done.

Justin Schultz got the comeback started; he’s continued to be one of Pittsburgh’s biggest assets on both sides of the blue line. Before the second period was up, Evgeni Malkin scored the Penguins’ second goal with a man advantage — his 29th goal on the season.

In the final period of play, both Jake Guentzel and Conor Sheary scored to give the Penguins one of the best victories of the season. With just under three minutes left, a beautiful display of passing and teamwork was put on in front of the home crowd, and Sheary scored the game-winning goal.

Pittsburgh’s 40th win of their season didn’t come easy, but the Penguins continued to show their ability to adjust to adversity and their resilience that this team has continued to have under the leadership of head coach Mike Sullivan.

Phil Kessel had nothing but praise for Fleury following the game: “He came in and made some great saves for us. He shut the door and allowed us to climb back in the game. He was phenomenal.”

Should the Penguins go on to make another deep playoff run, expect Fleury to be a major contributor to getting his team back to the Stanley Cup Finals.

The comeback of the season!

There was very little to enjoy in the first period. This isn’t to say the Sabres didn’t do a good job. In fact, with Murray having an off night, Buffalo did a great job of keeping up the pressure on both sides of the ice and of making the Penguins netminder work early and often.

With 21 shots to Pittsburgh’s 13, the Sabres were in complete control. But, whatever it was that kicked things into higher gear, the Penguins did eventually wake up.

The Penguins were able to hold Buffalo to just 10 shots in the second period, and Pittsburgh’s two-goal period was what gave the team so much momentum heading into the third. This was all happening while a cold goaltender put on a spectacle in net.

Pittsburgh has continued to show that it is never out of the game until that final buzzer rings. While only a handful of games remain, wins like Sunday night’s not only help playoff seeding but do good things for the general morale of the team, too.

The Pittsburgh Penguins next play Wednesday at the Winnipeg Jets at 8:00 p.m. EST.