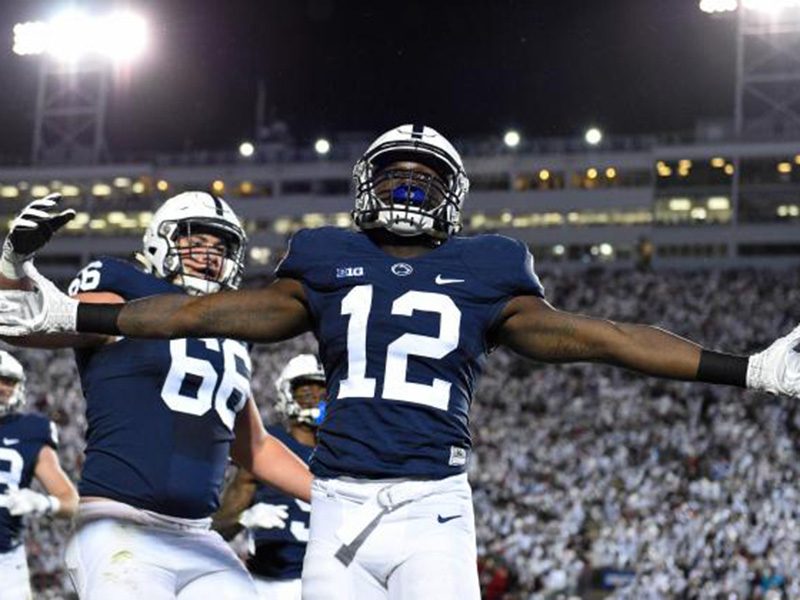 “This is special,” an emotional James Franklin, head coach of the Penn State Nittany Lions, said following his team’s 24-21 victory over the No. 2 Ohio State Buckeyes (6-1, 3-1 Big Ten) at Beaver Stadium. Franklin’s Nittany Lions (5-2, 3-1) pulled off a major upset after coming into the game as 18-point underdogs in Las Vegas.

“This is for everybody,” Franklin said. “This community has been through so much in the last five years.”

Ohio State held a 14-point lead as the fourth quarter started, but that didn’t matter to Penn State quarterback Trace McSorley and the rest of the Nittany Lions offense.

McSorley, a redshirt sophomore, led Penn State 90 yards down the field in five plays, culminating with a two-yard touchdown rush of his own to cut the deficit to seven points with 13 minutes left in the game. On the ensuing drive for Ohio State, the Nittany Lions — namely, Cam Brown — blew through the line and blocked a punt to give their offense the ball at the 28-yard line.

Following the recovery of the blocked punt, the Penn State offense spit and sputtered to manage a 34-yard field goal by Tyler Davis to cut the lead to four for the Buckeyes.

Ohio State marched down the field to put themselves in position to go up by seven with under five minutes left in the game — should they make a 45-yard field goal.

Plays don't get much bigger than this @PennStateFball one.

Allen blocked the field goal, and Grant Haley did the rest of the work, sprinting 60 yards to pay-dirt to put the Nittany Lions up 24-21 with 4:27 left in the game.

While Ohio State managed two first downs on its final possession, Penn State’s defense didn’t allow the Buckeyes to cross midfield. Facing a third-and-two at their own 42-yard line, quarterback J.T. Barrett dropped back and tried to out run linebacker Jason Cabinda, but it was all for naught, and the linebacker sacked the Ohio State signal-caller for a 13-yard loss.

Barrett and the Buckeyes’ offense faced a fourth-and-23 to keep the game alive, but Barrett was once again met in the backfield by Penn State defenders; Kevin Givens and Evan Schwan combined for the take-down.

Cabinda and fellow linebacker Brandon Bell combined for 31 tackles and two sacks in their first game back from injury. The dynamic duo returned to a injury-filled position group and made their impact known immediately.

While Cabinda and Bell had stand-out performances, it was defensive end Garrett Sickels who haunted Ohio State’s offense Saturday night. Sickels sat out the first half (the redshirt junior was suspended as a result of skipping a class during the bye week) but went on a rampage in the second half. He finished the third quarter with seven tackles and two-and-a-half sacks before getting two big tackles in the fourth quarter.

“Garrett Sickels is one of the best kids I’ve ever been around,” Franklin said. “Maybe I should suspend him for the first half the rest of the season.”

“Opportunity was knocking for us, and we needed to answer the door,” Franklin said.

And the special teams unit, which struggled through the first three quarters, answered that door in a big way. Prior to fourth quarter, kicker Tyler Davis had the first missed field goal of his career, and the punt team had a Tyler Yazuijan snap go over punter Blake Gillikin’s head into the endzone for a safety.

But in the fourth quarter, the unit came ready to play. Brown got the party started with his blocked punt to set up Davis’ 34-yard field goal, before Allen and Haley combined for one of the most memorable plays in Penn State history.

Franklin is going to “enjoy the victory for the next seven hours” before getting prepared for Saturday’s matchup against the Purdue Boilermakers, and he encouraged his team to savor the environment and emotions running rampant after the upset.