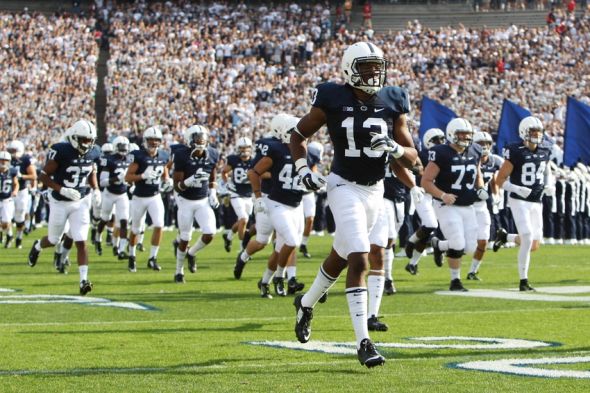 No. 7 Penn State Nittany Lions vs. No. 6 Wisconsin Badgers

The Game: For the first time in program history, Penn State will be competing in the Big Ten Championship game Saturday evening when the team takes on Big Ten West division champion Wisconsin.

The Nittany Lions got to Indianapolis by way of an 8-1 conference schedule that saw them win six of their conference games by 14 or more points. Following their lone conference loss to the Michigan Wolverines, Penn State has rattled off eight straight victories and outscored opponents 323-128 over that time span.

Quarterback Trace McSorley has led Penn State’s offense to the tune of 27 total touchdowns while throwing for 2,976 yards entering Saturday’s game against the Badgers. While McSorley has contributed through the air, sophomore running back Saquon Barkley, the Big Ten Offensive Player of the Year, has led the Nittany Lions on the ground with 1,219 yards and 15 touchdowns thus far.

Unlike Penn State, Wisconsin is a power running type of team, which is evident in the vast difference between rushing and passing yards on the Badgers’ stat sheet. Corey Clement leads the way for Wisconsin on the ground; the senior running back has amassed 1,140 rushing yards this season. Clement’s production has helped the Badgers average 201.5 rushing yards per game. Quarterback Alex Hornibrook, who was knocked out of last weeks game for Wisconsin with a concussion and is questionable to play Saturday, leads the team with 1,243 yards on the season and is averaging 113 yards per game.

While the Nittany Lions have success keeping the ball away from defenders, the Badgers’ secondary is full of ballhawks who love intercepting opposing quarterbacks. Wisconsin, as a team, has 21 interceptions leading in to Saturday’s game.

For Penn State to capture the championship and — potentially — a berth in the Rose Bowl, they will need to establish the running game early and often.

Actually, let’s be realistic, the Nittany Lions are a second half team through and through. Establishing the running game early will help set up their passing game in the second half.

If Penn State can keep the Badgers off the scoreboard for most of the first half, the Nittany Lions should find themselves celebrating after the game. Limiting Wisconsin’s running game will be huge. If there isn’t much of a run game, either Hornibrook or back-up Bart Houston will have to throw the ball — and that potentially puts the ball in harms way as both quarterbacks have a combined 10 interceptions on the season.

Another key to victory for the Nittany Lions Saturday is getting McSorley to beat Wisconsin with his feet. Opposing defenses tend to stack the box against quality running backs, and Penn State’s offense has seen its fair share of stacked boxes this fall. Using McSorley’s feet, especially in dive read situations, is something the Nittany Lions will really need to put points on the board and to come home victorious.