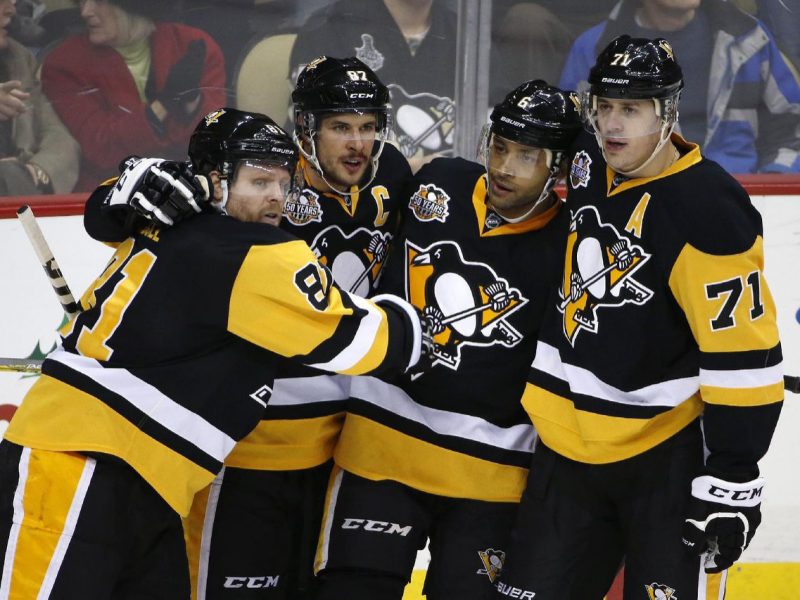 Over the last week, the Pittsburgh Penguins (19-7-3) have been on an absolute tear. In the last 10 games, the Penguins are 8-2-0 and have scored 50 goals while riding a six-game win streak.

Not only has Pittsburgh’s offense been revitalized, but a lot of this dominance has come from the team’s third and fourth liners. And Monday night, with a final score of 7-0, Pittsburgh was dominant once again and made the Arizona Coyotes look like they didn’t show up for the game at all.

Penguin players like Scott Wilson, Bryan Rust and Nick Bonino, who all scored goals Monday, were a big part of the reason why the Penguins won the Cup last year. And if they’re back to scoring like they did Monday, well, other teams should watch out.

While the Coyotes managed 30 shots on net, Pittsburgh netminder Matt Murray looked like a brick wall and earned his third shutout.

The Coyotes went through two goalies — Louis Domingue and Mike Smith — neither of whom were able to stop the powerful Pittsburgh offense. Arizona certainly didn’t do itself any favors by giving up the puck several times right around its net, leading to several easy goals for Pittsburgh.

And even though he was unable to score a goal tonight, it was a good sign to see Evgeni Malkin play a part in the offense, notching two assists.

One of the highlights in Monday night’s game was Sidney Crosby’s 21st goal of the season (a league-high), which happened on a power play. Crosby swung his stick like a baseball bat to hit the puck in mid-air, putting the Penguins up 5-0 before even the start of the third period.

Crosby wasn’t the only one tonight who hit home runs Monday. Phil Kessel scored his 10th goal of the season via a slapshot — somewhat of a rarity from the big winger. In addition, Pittsburgh benefited from defensemen Trevor Daley and Justin Schultz, who both had a hand in the Penguins’ explosive win.

A few other goals were a result of a player or two screening Arizona’s netminder and getting his eye off of the puck handler. Pittsburgh’s forecheck also put enough pressure on the Coyotes and caused timely turnovers and bad giveaways.

While the Penguins only managed to score twice on power plays despite having seven chances, their two goals came from great puck movement. Pittsburgh may not have the biggest or most solid players who can swing by the net and hold their own, but the Penguins’ beautiful tick-tack toe-type passing makes them look dangerous.

Pittsburgh did get lucky that the Coyotes didn’t adjust much during the game. With the beginning of each new period, Arizona seemed to continue its game plan of bringing a forward up close to the point, which allowed the Penguins to drift freely around Arizona’s net.

Pittsburgh found good rhythm early, even though the team only managed one goal in the first period. But a four-goal second period put the game completely out of the Coyotes’ reach.

What really made the Penguins look so good was the fact they didn’t miss chances to get easy goals. Monday, the Penguins not only played like a divisional leader, they took their foot off the gas pedal, getting a pair of goals in the third period.

The Penguins will host the Boston Bruins this Wednesday at 7:30 p.m. EST.