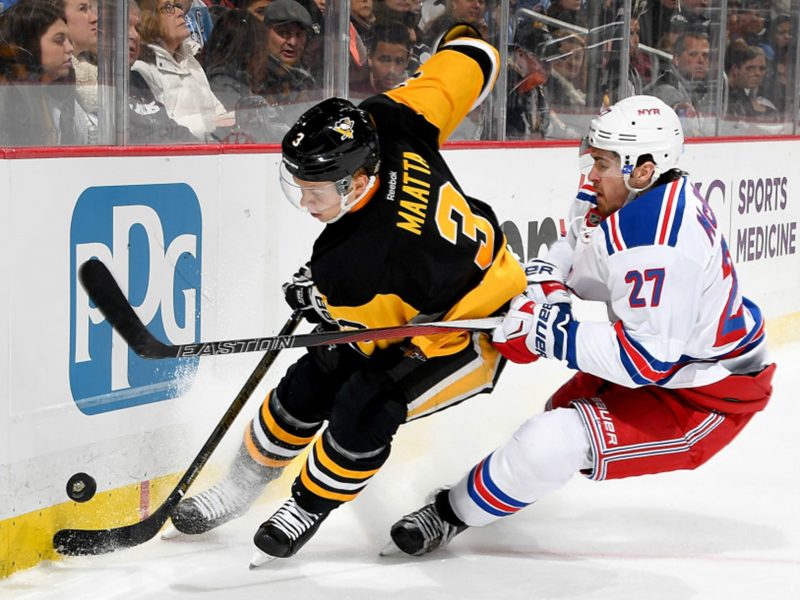 After their seven-game win streak was broken over the weekend, the Pittsburgh Penguins (21-7-5) finally got back into the win column Tuesday night after two overtime losses. The New York Rangers (23-11-1) came into Pittsburgh to play one of the best divisional rivalry games in the NHL, but New York would leave with its head down, falling to the Penguins, 7-2.

The first period started with a Sidney Crosby power play goal, his 22nd goal of the season. Matt Puempel managed to get a goal just before the end of the period, which tied the game heading into the next period.

In the second period, the Penguins added two more goals — one by Evgeni Malkin, his 14th goal of the season, and the other by Phil Kessel, his 11th of the season. With a 3-1 score heading into the final period, the Pittsburgh offense exploded in the third period to put the game out of reach.

Although Michael Grabner was able to score within the first few minutes of the final period to make the game 3-2, four straight goals by the Penguins capped off the dominant victory.

The timing of the win certainly couldn’t have come at a better time with the Penguins failing to finish off games that led to two straight overtime losses. Defenseman Justin Schultz has continued to be one of Pittsburgh’s hottest hands this season, scoring his sixth goal and beginning the third period brigade against New York.

“I thought it was one of our more complete games,” said Penguins head coach Mike Sullivan. “I thought we came out with a lot of energy. We had a great start. I thought we grabbed momentum right from the very first shift.”

A lot of players had a hand in Tuesday night’s victory, and a lot of that was because of Pittsburgh’s teamwork. Many of the Penguins’ seven goals came from the shooter being set up pretty darn well.

Pittsburgh also benefited from the Rangers not having a good defensive game. While New York netminder Antti Raanta made 40 saves, the constant pressure by the Penguins and turnovers by the Rangers led to the Pittsburgh scoring.

In the prior two games, Pittsburgh only scored a combined two goals; it’s clear now that the scoring slump didn’t last long at all.

Not only were the Penguins able to rebound after two tough losses, they were able to send a message to the rest of the Metropolitan division that they aren’t going anywhere.

Pittsburgh goaltender Matt Murray, who is now 13-2-1 on the season, made 26 saves against New York.

One thing that has stood out about Murray, even going back to the playoffs last season, is that he doesn’t seem to be discouraged by tough opponents.

Don’t forget, last year, Murray helped the Penguins roll past some of the toughest teams in the league in the playoffs, and he’s doing the same this season. His impressive play against some of the most talented teams has been Murray’s brightest spot on the season — well, aside from his record.

Murray has also had the benefit of having a very aggressive offense play in front of him. For example, the Rangers were outshot 22-9 in the first period.

With both Pittsburgh’s defense and offense flexing its muscles, the last factor comes down to the netminder — and in Tuesday night’s game, all three phases of Sullivan’s team were on point.

The Penguins will next play the Columbus Blue Jackets on the road Thursday night at 7:00 p.m. EST.