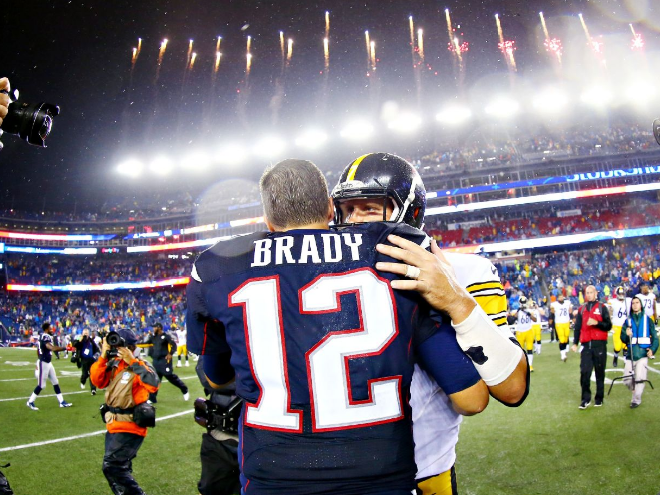 Tom Brady is 9-2 in games against the Pittsburgh Steelers. (Photo by: Maddie Meyer/Getty Images)

For the first time since the 2004 season, the Pittsburgh Steelers and the New England Patriots will face off in the AFC Championship Game with kickoff set for 6:40 p.m. EST at Gillette Stadium in Foxboro, Mass. The Patriots have certainly had the Steelers’ number in the Tom Brady-Bill Belichick era (New England holds a a 9-2 record in meetings with Brady under center), but the Steelers — on a nine-game winning streak — come in as the hottest team in the NFL.

There are plenty of things that will need to happen for Pittsburgh to emerge victorious Sunday night, but here are five key factors to focus on in preparation for what promises to be classic contest between the best teams in the AFC.

Despite history, Roethlisberger must be at his very best in Foxboro

At the very top of the keys to Pittsburgh advancing to the the Super Bowl will be the play of quarterback Ben Roethlisberger. Although it’s a safe bet that Roethlisberger will eventually end up with a bust in Canton, he’s spent much of his career playing in Brady’s shadow.

Roethlisberger heads to Foxboro in the midst of a frustrating stretch of inconsistent play where he’s yet to find a rhythm as a passer. His struggles have been especially apparent on the road, where he’s thrown a mere nine touchdown passes and has equaled that total in interceptions. Beyond stats, the “eye test” speaks to a quarterback who is a touch off and is lacking the timing and rhythm he’ll need to play with if the Steelers are going to upset the Patriots.

This is a massive game for Roethlisberger — for obvious reasons, but also in terms of finally finding a way to push past Brady and New England.

If Roethlisberger is at his best, the Steelers have a very good chance of winning.

Pressure Brady, and don’t allow Patriots’ running back trio to get rolling

One of the biggest reasons for the Steelers’ resurgence in the the second half of the season is that the defense has been sacking the quarterback. Over the team’s nine-game winning streak, Pittsburgh has 31 sacks — including six in the playoffs. Getting to Brady is never easy, but the emergence of linebacker Bud Dupree and the continued excellent and inspired play of ageless wonder James Harrison, there’s reason to have confidence it can be done.

Disrupt Brady’s rhythm, frustrate him, get him thinking about getting hit — and you have a chance.

Last week, we saw former Pitt standout running back Dion Lewis break out with three touchdowns, and his presence is going to present a number of challenges for Pittsburgh. Equally tough as a pass catcher, Lewis is strong between the tackles. If he has a performance similar to the one he had against the Houston Texans, the Steelers will be in a lot of trouble.

It’s hard not to forget about fellow running back LaGarrette Blount, who went from quitting on his team in Pittsburgh to becoming the lead back for the Patriots. Although Lewis is coming off a big game, Blount is a threat with his downhill running style, and he can’t be allowed to get rolling.

Don’t forget about James White, either; he had 60 catches out of the backfield this season. Knowing what we know about New England, don’t be surprised if White’s a big part of the game plan tomorrow night.

Offensive line might be the best in the game — show it

What stood out more than anything in Pittsburgh’s first two playoff wins against the Miami Dolphins and Kansas City Chiefs was the dominating work of the Steelers’ offensive line. The unit has physically overwhelmed its opponents and although New England’s front seven has been excellent, this is a matchup Pittsburgh can — and must — win. If the Steelers’ offensive line can win this battle decisively, it should allow its offense to put points on the board and control the clock.

Dictate the flow of the game

Simply put, for all the talk about what Belichick and his staff will do to the Steelers, it’s got to be about what the Steelers and head coach Mike Tomlin will do to the Patriots. Offensively, coordinator Todd Haley must be creative with his play calling and utilize all the weapons at his disposal. Make the defense guess and find ways to get not only Le’Veon Bell and Antonio Brown involved, but must also get players like Eli Rogers, Darrius Heyward-Bey and Jesse James the ball.

One way to beat New England is to throw new formations at the Patriots. How about getting running back DeAngelo Williams involved? Putting both Bell and Williams on the field at the same time is a twist Pittsburgh has yet to use this season, and it might be something the Patriots won’t be prepared for.

Regardless, the Steelers’ offense must score touchdowns. Six field goals might work against the Chiefs, but it certainly won’t against the high-powered Patriots.

Defensively, the Steelers must be aggressive with their approach; press coverage and messing with the timing of Brady’s dink-and-dunk passing attack is going to be key. Of course, the risk is giving up the deep pass, but if you let Brady pick you apart with the short passing game, then it also opens up the run game, which we saw happen in the Steelers’ loss to New England back in October.

While the storylines always seems to be about what Belichick does, it’s time for Pittsburgh to turn the tables and dictate how the game is played.

You can’t tip-toe into the lion’s den

One of Tomlin’s favorite mantras is, “You can’t live in your fears,” and when the Steelers step onto the field at Foxboro, they better heed those words if they expect to beat New England.

Besides being a flat-out great team, another reason why the Patriots are so tough to beat is that many opponents are intimidated by the looming shadow of the team’s success. Teams see Brady and they go into (metaphorically speaking) a prevent defense hoping to survive instead of win. Teams look at the dominance of an organization under Belichick and often get overwhelmed by the challenge ahead of them before the game has even started.

The Steelers can’t fall into those traps, and I don’t suspect they will.

Sure, the Patriots have waltzed through a cake-walk of a schedule mostly devoid of serious challengers. But the Steelers started the season 4-5 and have since gone on a tear, winning nine straight, and they’ll head to Foxboro full of confidence.

Pittsburgh must expect to win and play like it from start to finish.

If they do that, a trip to Houston is well within reach.