Home / NHL / Playoff berth on the line for Pens and Sens

The Pittsburgh Penguins are playing in what is perhaps their biggest regular season game in recent history tonight. The Pens, despite their recent run of poor play, know exactly what they need to do to get into the Stanley Cup playoffs: beat the Ottawa Senators tonight. 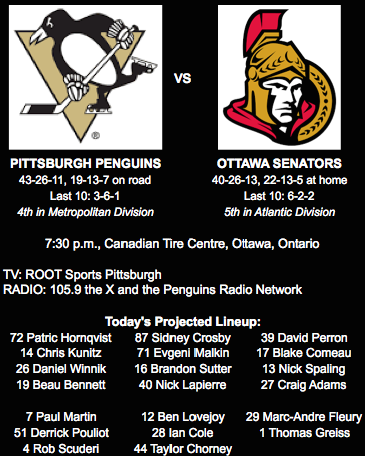 With a win, the Penguins would not only clinch their ninth consecutive playoff berth, they would also be able to rest a banged up roster for back-to-back games against the New York Islanders and Buffalo Sabres this weekend.

The Penguins would not be eliminated with a loss, and in fact, they would still hold their own fate in their hands. Their magic number is four; meaning that any four points earned by the Penguins and/or lost by the Senators will secure a spot for the black-and-gold.

If they lose tonight, they would likely be facing must-win games this weekend.

For Ottawa, a win does not guarantee a spot, but would give them some much-needed wiggle room. The Senators finish with the New York Rangers on Thursday and the Philadelphia Flyers on Saturday

TONIGHT’S OPPONENT: The Ottawa Senators have been on absolute tear over the last two months of the season. Since February 7, the Sens are 20-5-4 and have gained ten points on the eighth and final playoff spot. 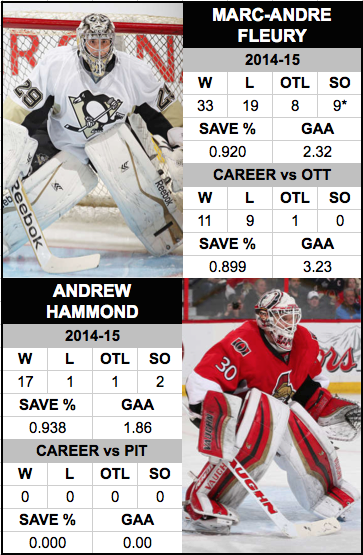 The biggest change for the Senators from their dismal start to the season has been in goal. Unheralded rookie Andrew Hammond came into the lineup in Mid-February and has done nothing but win; getting a victory in 17 of his first 20 decisions and earning his team at least one point in 19 of 20.

The 6’1”, 196-pound native of Surrey, British Columbia’s success is even more unlikely given his origins: he went undrafted out of Bowling Green, where he played over 30 games just once in four seasons. He then started for Ottawa’s farm club in Binghamton, New York for a season and a half, posting pedestrian numbers.

Hammond, more popularly known as “The Hamburgler”, burst onto the scene this year and hasn’t relinquished his hold on the starting job, supplanting former starter Craig Anderson. This will be Hammond’s first appearance against the Penguins.

THE 4077: Injured right-winger Steve Downie (upper body) made the trip to Ottawa, but will not play tonight. It seems likely that he could play this weekend if necessary.

Defensemen Christian Ehrhoff and Kris Letang are not with the team. Head coach Mike Johnston does not expect them to return in the regular season, but said that there are “indications that they could be ready” for the postseason.

Ehrhoff (upper body) is skating with strength and conditioning coach Mike Kadar in Pittsburgh, while Letang (concussion) has only worked out on a bike thus far. 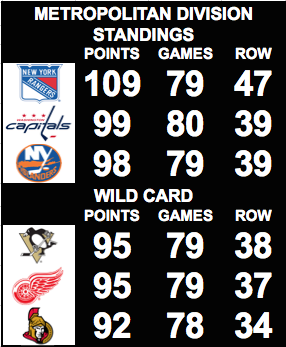 SCOREBOARD WATCHING: The most important action for the Penguins tonight will be on the ice in Ottawa, but there are other interesting matchups in the Eastern Conference, as well.

The Islanders are in Philadelphia for a 7:00 p.m. faceoff against the Flyers. A win would clinch a playoff berth for the Isles. The Penguins are three points behind them for the third spot in the Metropolitan Division.

The Red Wings are hosting the Carolina Hurricanes in Detroit at 7:30. A Detroit victory coupled with a Pens win over Ottawa would clinch a berth for the Red Wings.

Finally, the New York Rangers, already Metropolitan Division champions, can clinch the President’s Trophy as the NHL’s top regular-season team with a win over the New Jersey Devils in Newark. That game starts at 7:00 p.m.

Joining him in Wilkes-Barre will be top goaltending prospect Tristan Jarry, who joined the team today after his Edmonton Oil Kings were eliminated from the Western Hockey League playoffs last week. Jarry, 19, played 55 games in Edmonton this season and posted a .907 save percentage and a 2.74 goals-against average. He has already signed and entry-level contract that will begin next season.

The WBS Penguins also signed defenseman Steven Shamanski to a pro try-out from the Elmira Jackals of the ECHL. Shamanski is a 25-year old Providence College grad in his first professional season. In 68 games with the Jackals, he has 14 goals and 24 assists.

The Penguins’ ECHL affiliate, the Wheeling Nailers (33-33-2, 5th in ECHL North) will return to action tomorrow night, desperately needed a win over the Reading Royals. The Nailers are three points behind the Cincinnati Cyclones for the final spot in the ECHL playoffs. Wheeling has four games remaining and Cincinnati has three.