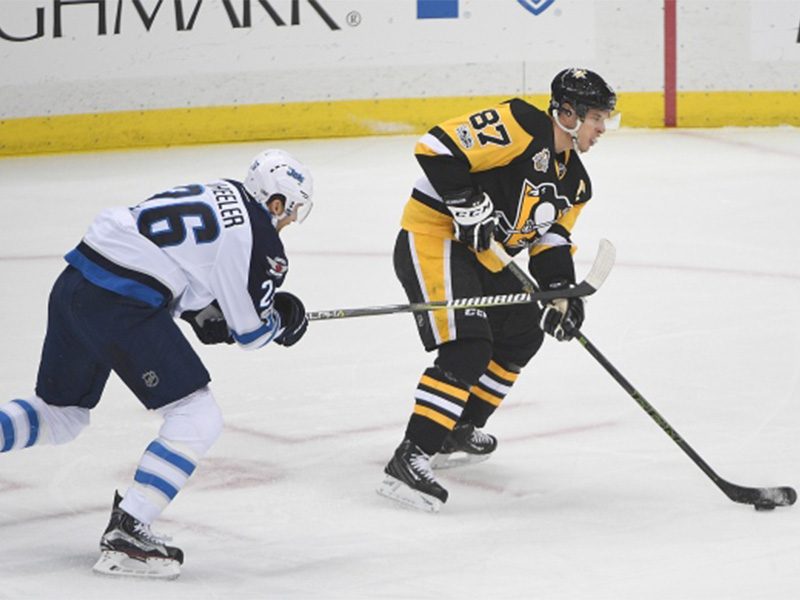 Sidney Crosby gets point No. 1000 on a first-period assist on a goal by Chris Kunitz. (Photo by: Justin Berl/Getty Images)

Hockey isn’t a sport for the light-hearted, and Thursday night’s game between the Pittsburgh Penguins (36-13-7) and the Winnipeg Jets (26-29-4) sure proved that. While the first half of the game was fairly well controlled by Pittsburgh, which put up a 2-0 lead, the Jets stormed back, scoring one goal in the second and two in the third.

But even though the Penguins lost the lead halfway through the third, Winnipeg couldn’t hold off one of the league’s best offenses. With just over five minutes left in the game, Phil Kessel scored his 21st goal of the season on the power play, which ultimately set his  team up for the 4-3 overtime win.

Overtime was absolutely spectacular, even though a few miscues led to the Jets almost stealing the win from Pittsburgh. For example, an ankle-twisted Jake Guentzel at his opponent’s blue line gave up possession to Jacob Trouba. Trouba took his time getting down the ice on the breakway but was greeted by a standing Marc-Andre Fleury, who made the spectacular save.

After that chance, the Penguins regrouped with Kris Letang stretching a pass down the ice to Evgeni Malkin, who drove through a Jets players and swept the pass across the crease where Sidney Crosby landed the winning shot.

All the excitement late in the game almost overshadowed the game’s biggest story: Crosby finally earned the 100th point of his career with an assist on Chris Kunitz’s first-period goal. Crosby quickly got started on his next 1000th point with an assist on Kessel’s third-period goal and, of course, scoring the game-winner in overtime.

Still, this win wouldn’t have been possible without Fleury making some incredible saves late into the game because of several bad turnovers by Pittsburgh. Winnipeg was beginning to heat up in their transition offense and was on-point and dangerous during overtime.

A Kid no more

Thursday, Crosby became the 86th player to reach 1000 points — and is the 12th youngest to do so.

Since becoming a Penguin 12 years ago, Crosby has been the team’s biggest asset. But, of course, after the game, Crosby deflected the praise elsewhere; he wouldn’t be Sidney Crosby if he didn’t mention the players around him. Following the game, he gave credit to the teams and players he has been surrounded by in his time as a pro.

His humbleness isn’t often something seen in professional sports, and it really puts into perspective how good the players around Crosby need to be.

He’s a playmaker, but his ability to set up teammates with ridiculous passes — like the one on Kunitz’s goal for No. 1000 — is the biggest reason as to why Crosby got to this milestone, and why he did it so quickly.

His work ethic, skill level and drive is what has gotten this special player to where he is. What’s most exciting, too, is knowing he has a lot of hockey left in him. Last winter, fans witnessed a Crosby who looked defeated, but, a little over a year later, the captain is again dominating as the league’s best player and only continues to get better.

Fleury ekes out the win

Fleury had a very up-and-down game. Carrying a shutout over halfway through the second period, the wheels began to fall off after Patrik Lane scored his 27th goal a few minutes before the second intermission.

In the first half of the final period of play, the Jets scored two more times to take the 3-2 lead. Luckily, with the help of Kessel, Fleury was given the chance to continue fight, and his strong play in net took the game into overtime. There, the Flower was worked for his money and blocked several great chances by Winnipeg.

Between a handful of odd-man rushes and a breakaway in the three-on-three overtime, Fleury’s offense managed to pick up its play and finished with a great win. Although he hasn’t been getting the playing time he probably wants, Fleury proved tonight why trading him could be a mistake if the Penguins want to make another run at the Stanley Cup.

Defense comes up big despite injuries

The Penguins played much of the game with just four defensemen as Olli Maata left after just 7:38 (perhaps with a hand injury) and Justin Schultz left after 8:40 (with what looked like a head or neck injury). Pittsburgh head coach Mike Sullivan didn’t have any updates after the game, but he did praise the team’s defensive effort.

“The four guys that played the remainder of the game did a really good job under the circumstances,” Sullivan said.

At one point, the Penguins had to play with three defensemen when Trevor Daley was sent to the box in the second period.

The Penguins don’t get a break after Thursday night’s game. They’ll head to Columbus to play the Blue Jackets, who were moved to third place in the Metropolitan division following Pittsburgh’s win, Friday night at 7:00 p.m. EST.