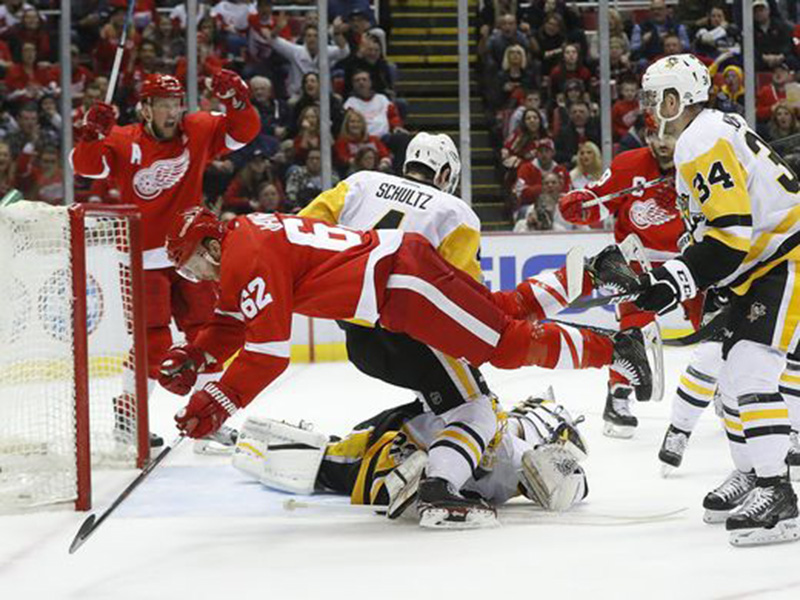 Prior to Thursday, the Pittsburgh Penguins (26-11-5) hadn't lost two games in a row all season. And now the Penguins have added to that losing streak, falling 6-3 to the Detroit Red Wings (18-19-6) on Saturday night. A Kris Letang goal in the opening minute of the game instantly put Pittsburgh in the lead. And the Penguins' lead would increase in the second period with a goal from Evgeni Malkin. But Detroit wouldn't go down without a fight. Two straight Red Wings goals by Gustav Nyquist and ... END_OF_DOCUMENT_TOKEN_TO_BE_REPLACED

The Pittsburgh Penguins have signed Detroit Red Wings minor-leaguer Kevin Porter to a one-year, two-way contract worth $575,000 at the NHL level. Porter, 29, is a 5-foot-11, 194-pound center with a left-handed shot. He spent the 2014-15 season with the Red Wing’s Triple-A affiliate, the Grand Rapids Griffins, where he scored 16 goals and 23 assists in 76 games. The journeyman has spent time with the Phoenix Coyotes, Colorado Avalanche and Buffalo Sabres over his seven-year professional ... END_OF_DOCUMENT_TOKEN_TO_BE_REPLACED

The Pittsburgh Penguins turned in yet another lackluster effort, as they dropped their second straight game, this time a 5-1 loss to the Detroit Red Wings. Despite Penguins captain Sidney Crosby, who was a game-time decision with an undisclosed illness, being able to take his regular spot on the Pens’ top line, they were unable to muster much scoring. Discipline was also an issue for Mike Johnston’s squad. They took 64 minutes’ worth of penalties, including a game misconduct by Kris ... END_OF_DOCUMENT_TOKEN_TO_BE_REPLACED 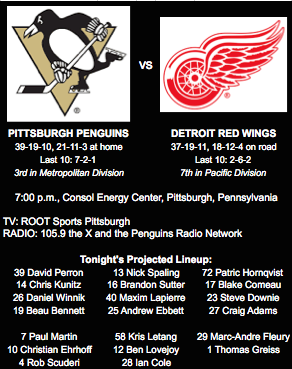 The Pittsburgh Penguins have less than 24 hours to recover from yesterday’s hectic 2-0 loss to the Boston Bruins in which they lost both Sidney Crosby and Evgeni Malkin. Today, they’ll face another dangerous opponent in the Detroit Red Wings. TODAY’S OPPONENT: The Red Wings have lost four out of their last five games, including a 7-2 thrashing at the hands of the Philadelphia Flyers on Saturday. Detroit has now fallen to within three points of fourth-place Boston. This is the third and ... END_OF_DOCUMENT_TOKEN_TO_BE_REPLACED