Flyers forward Zac Rinaldo was suspended eight games by the NHL’s department of player safety for this hit on Penguins defenseman Kris Letang on last Tuesday night. [youtube width="560" height="315" link="http://youtu.be/z7nr2UlQZxI"] The hit, which the league characterized as charging and boarding, took place at 15:36 of the first period. Letang left the game and did not return. He also missed the Penguins’ next game, which was last Wednesday night against Chicago. On-ice officials ... END_OF_DOCUMENT_TOKEN_TO_BE_REPLACED 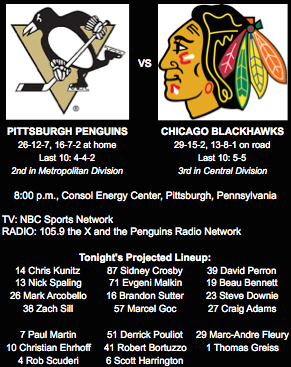 The Penguins are stumbling into the all-star break with losses in three consecutive games coming into tonight’s matchup with the Chicago Blackhawks, their final chance to turn things around before the break. TONIGHT’S OPPONENT: It will be a back-to-back situation including travel for both teams. The Penguins lost 3-2 in overtime in Philadelphia last night while the Blackhawks were handling the Arizona Coyotes 6-1 in Chicago. The Blackhawks, who looked like absolute world-beaters in the ... END_OF_DOCUMENT_TOKEN_TO_BE_REPLACED

Although he had 34 saves, Marc-Andre Fleury did not get a win for his birthday as the Pittsburgh Penguins fell to the Carolina Hurricanes at CONSOL Energy Center by a final score of 4-2. The first period was anticlimactic. The Hurricanes scored first; Jiri Tlusty deflected the puck off of Olli Maatta’s skate to sink it in the net behind Fleury with 4:13 left to play in the first, but Kris Letang leveled the score at 1-1 less than 45 seconds later, grabbing an easy rebound goal against Carolina ... END_OF_DOCUMENT_TOKEN_TO_BE_REPLACED

With the NHL lockout in full effect, there hasn't been much news surrounding the Pittsburgh Penguins lately. As of now, there is no end in sight and the Winter Classic is now in jeopardy as sources told ESPN's Scott Burnside that if a deal isn't reached by November, that commissioner Gary Bettman is prepared to pull the plug on what is dear to him.However, while the lockout has already affected the preseason, as all exhibition games through September have been cancelled, that hasn't stopped ... END_OF_DOCUMENT_TOKEN_TO_BE_REPLACED