The Pittsburgh Riverhounds matched up against Louisville City F.C. on Sunday evening in a match in which both teams were searching for their second win of the season. Neither side would find a way to get a win and the match ended in a 1-1 tie. Pittsburgh came just short of taking three points and moving ahead of Louisville in the Eastern Conference standings. The first half was filled with back and forth entertainment with neither team able to grab much momentum. The Hounds were able to ... END_OF_DOCUMENT_TOKEN_TO_BE_REPLACED

The Pittsburgh Riverhounds played their second game of the season tonight after beating the Harrisburg City Islanders, 5-2, last week in their season opener. This time, the Riverhounds would be facing a much tougher defense in the Rochester Rhinos. Both teams played incredibly physical for the duration of the match, which made for a great game. Rochester was able to continue this tough play and wear down the Riverhounds at the end to edge out Pittsburgh, 2-1 The first goal came by the Rhinos ... END_OF_DOCUMENT_TOKEN_TO_BE_REPLACED

Pittsburgh Riverhounds midfielders Rob Vincent and Kevin Kerr were named to the first United Soccer League team of the week of 2015 on Tuesday. The pair of midfielders, who were deployed on the wings in a 4-5-1 formation by head Coach Mark Steffens, combined to score all five of the club’s goals in their 5-2 win over the Harrisburg City Islanders in the home opener on Saturday. Vincent, 24, scored two goals and assisted on two of Kerr’s tallies. The Liverpool-born midfielder led the team ... END_OF_DOCUMENT_TOKEN_TO_BE_REPLACED

In an offseason where almost everything changed for the Pittsburgh Riverhounds, a pair of holdovers was the key for the Hounds in a 5-2 victory over the Harrisburg City Islanders. Midfielders Kevin Kerr and Rob Vincent, playing for the first time under new head Mark Steffens, provided the offense, combining to score all five goals, and goalkeeper Ryan Thompson made a number of athletic saves to lead the Hounds to their first season-opening victory in three tries at Highmark Stadium. “It ... END_OF_DOCUMENT_TOKEN_TO_BE_REPLACED 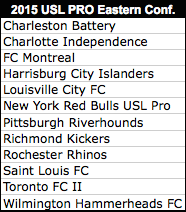 The Pittsburgh Riverhounds announced their pre-season schedule for the 2015 season on Tuesday. They will play seven pre-season matches against regional collegiate opponents while preparing for their fifth year in USL Pro and and 16th season overall. Their preseason slate will start February 24 against the University of Pittsburgh and wrap up March 21 against the University of Charleston. Six of the seven games are scheduled for Highmark Stadium and will have free admisson. The Riverhounds ... END_OF_DOCUMENT_TOKEN_TO_BE_REPLACED