When Slippery Rock’s women’s basketball team upset Gannon on the road a month ago, many saw it as a fluke. That notion was wiped out Saturday evening when Slippery Rock completed its first-ever season sweep of Gannon with a 62-53 win at home on Senior Night. The biggest keys to the Rock’s second upset of Gannon this time was hitting 10 three-pointers, and forcing 20 Lady Knight Turnovers. The Rock (13-14, 9-12) came out energized after the senior ceremony and staked to a 23-11 lead after ... END_OF_DOCUMENT_TOKEN_TO_BE_REPLACED

The IUP men’s basketball team is officially on a roll. Coming into Sunday afternoon’s NCAA Division-II regional semifinal matchup against Slippery Rock, the Crimson Hawks had won seven of their last eight games. They made if eight wins in their last nine with a 73-65 victory over PSAC rivals Slippery Rock in the Atlantic Regional semifinal in West Liberty, West Virginia. The Crimson Hawks were led by 23 points from Shawn Dyer, who shot 6-for-10 and was a perfect 10-for-10 on the ... END_OF_DOCUMENT_TOKEN_TO_BE_REPLACED

Two PSAC teams advanced to the second round of the NCAA Division-II men’s basketball tournament on Saturday. IUP, the third seed in the eight-team region, defeated the sixth seeded Glenville State Pioneers 73-53. Devante Chance led the Crimson Hawks with 22 points, shooting 7-of-10 from the field. The senior guard also had five assists and three steals. 6-foot-6 forward Jeremy Jeffers proved a matchup problem for the Pioneers, as he was 4-of-8 from the field and 3-for-4 from beyond the ... END_OF_DOCUMENT_TOKEN_TO_BE_REPLACED

The path towards toward a PSAC basketball championship continued Tuesday night with three quarterfinal games in action. IUP, Kutztown and Gannon were all victorious and are now set to play in the semifinals this Saturday at Gannon University. Here's a recap of last night's games. Gannon 71, Slippery Rock 45: The PSAC West top seed Gannon charged out to a commanding lead early courtesy of hot shooting beyond the arc. The Golden Knights could not miss in the first half, hitting all seven ... END_OF_DOCUMENT_TOKEN_TO_BE_REPLACED 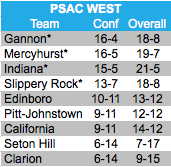 Four Pennsylvania State Athletic Conference West Division NCAA Division-II men’s basketball teams are ranked in the latest Atlantic Region top ten. Sitting at the top of the rankings are 22-2 West Liberty (Wv) and 17-8 Fairmont (Wv) State from the Mountain East Conference, which are then followed by four straight PSAC schools. Indiana University of Pennsylvania (21-5) is ranked third in the region thanks to a strong non-conference record. Gannon (18-8), currently in first place in the ... END_OF_DOCUMENT_TOKEN_TO_BE_REPLACED

In 2012, Slippery Rock finished with a 6-5 record. Despite just being one game above .500, The Rock posted a 5-2 conference record and finished 4th in the PSAC West. This season, they're losing their leading rusher, but are returning their dynamic dual-threat quarterback and their five leading receivers. Defensively, they're bringing back their leading tacklers at linebacker and a strong ballhawking secondary. Together, they return nine starters on each side of the ball. Here's a preview of ... END_OF_DOCUMENT_TOKEN_TO_BE_REPLACED

Football season is almost here, and with that comes preseason awards. Several publications announced their preseason All-Americans this past week and two teams from the PSAC West landed players on the list. Cal U landed one player on the Lindy's and Sporting News lists while Slippery Rock landed five on the 25th Annual USA College Football Division II list. Cal U's senior defensive end BJ Stevens was named to the First-Team All-American squad by both Lindy's and Sporting News. Stevens set the ... END_OF_DOCUMENT_TOKEN_TO_BE_REPLACED

Slippery Rock's head coach George Mihalik released the 2013 football schedule this morning. The schedule presents a tough road ahead for The Rock, as six of their games are against opponents who finished the 2012 season with a winning record, and three of those teams competed in the NCAA DII playoffs. Among those teams are PSAC Champion and Super Region One runner-up IUP, Shippensburg, and Bloomsburg. All three teams won at least 10 games last season, with IUP and Shippensburg winning ... END_OF_DOCUMENT_TOKEN_TO_BE_REPLACED

IUP and Slippery Rock aren't strangers in any sense of the word. They've played each other three times this season, including once in the championship game of the PSAC Tournament. IUP has won two of the three match-ups but they've all been close, with only 15 points separating the winner from the loser in the three games combined. For IUP, they'll look to continue to have strong play from guard Anthony Wells. Wells is averaging just over 15 points per game against The Rock this season. He ... END_OF_DOCUMENT_TOKEN_TO_BE_REPLACED

WEST LIBERTY, WV - Coming into today's game, Slippery Rock had never won an NCAA Tournament game that was a compensation game. But today at West Liberty the number 7 seed Slippery Rock upset number 2 seed Winston Salem in the first round of the NCAA Division 2 Men's Basketball Championship, 69-67. Slippery Rock clawed away at Winston Salem the entire game, but could never seem to pull away. It took the final seconds to decided a hard fought battle between the two teams. Winston Salem ... END_OF_DOCUMENT_TOKEN_TO_BE_REPLACED