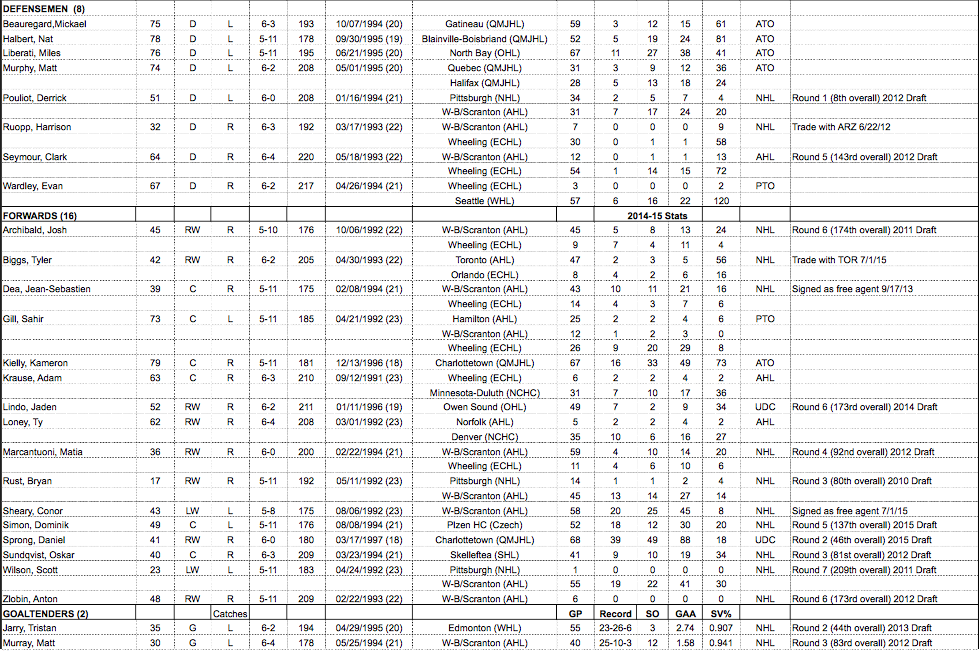 The Pittsburgh Penguins have announced their roster for the 2015 rookie tournament to be held in London, Ontario on September 11-13. The Penguins prospects and tryouts will compete against those representing the Toronto Maple Leafs, Montreal Canadiens and Ottawa Senators at Budweiser Gardens, home of the Ontario Hockey League’s London Knights. The Penguins will bring 16 forwards, 8 defensemen and two goaltenders to Ontario. 14 of the 26 players are already under NHL contract, three are on ... END_OF_DOCUMENT_TOKEN_TO_BE_REPLACED

At Consol Energy Center on Tuesday, 34 players took to the ice for the Pittsburgh Penguins’ annual prospect development camp. For the Penguins, who suffered an injury plagued 2014-15 season, it’s the four that did not play that may be troublesome. Left-winger Scott Wilson, center Oskar Sundqvist, and right-wingers Tyler Biggs and Josh Archibald all missed the first day of prospect camp and are not expected to skate this week. Wilson, 23, could be in line for a fourth-line job in Pittsburgh ... END_OF_DOCUMENT_TOKEN_TO_BE_REPLACED

While the biggest stories of Wednesday afternoon were the hotly anticipated acquisition of Phil Kessel and the exodus of the Penguins free agents, the Penguins quietly built up their depth on day one of free agency. Acquired in the Kessel trade, defenseman Tim Erixon should shore up the Penguins defense as a depth option. Erixon, 24, was the Calgary Flames first round pick in the 2009 NHL Draft. He’s bounced around the league since then, being traded several times, and was claimed on ... END_OF_DOCUMENT_TOKEN_TO_BE_REPLACED