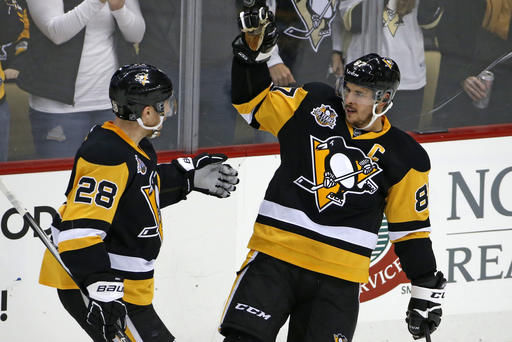 “I can’t say I expected it,” Rust said. “(The last time I scored a hat trick) was more of a blowout. The team wasn’t as good. This game was just find a way to get open in certain situations, and I was lucky enough to get a penalty shot.”

Rust wasn’t the only one getting in on the action as Sidney Crosby, Matt Cullen, Phil Kessel, Justin Schultz and Evgeni Malkin all brought their A-game in the Penguins’ victory over the Senators. The offense, after struggling to put up consistent numbers, has certainly done just that in the last handful of games — and the team has won its third-straight game.

Over that win-streak, Pittsburgh has managed to put up 19 goals.

Over the past seven games, although the defense and goalie situation has been a bit in flux, the Penguins are 5-2 with losses to the Minnesota Wild and the New York Islanders.

The Penguins may or may not be in what could be the start of a tear, but, however you look at it, head coach Mike Sullivan has put together what may be the most resilient team in the league. Not only does Pittsburgh have yet to lose back-to-back games this season, but, even when trailing — like Monday night when the Penguins were down 4-2 — the team always finds that extra gear.

Call it motivation, call it persistence — whatever it is, the Penguins have it. The team has made one thing clear: No opponent’s lead is safe. The tide began to turn against the Senators when Cullen scored his sixth goal of the season on a shorthanded backhand shot on a breakaway.

Then, within minutes, Kessel added a goal to the mix to tie the game. Just 24 seconds later Schultz, who has been outstanding in every facet of his game, scored to give Pittsburgh a 5-4 lead.

After that, the Penguins never looked back.

Defense is the New Offense

Monday night showcased another stellar offensive performance by the defense; each pair had made its fair share of contributions to this point. However, against Ottawa, all six defensemen ended the night with a total of six points. While five of those were assists, Pittsburgh’s defense has become more aggressive on the blue line.

Granted, they are defensemen, and they’ve struggled around the net recently — regardless of which goaltender is in there. But the production the defense has generated offensively has mostly made up for bad turnovers and mistakes. If the offensive power continues, the Penguins have a bright outlook for the rest of the season.

It’s one thing when the likes of Crosby, Malkin, Kessel and Hornqvist are able to generate offense, it’s a whole different game when the defense is able to slam the puck to the crease, giving others a shot at a rebound or deflection.

The only question now is whether this is sustainable.

To put that question to bed, it isn’t.

The defense needs to be relied on to stop the puck, not score it. But if the defensive pairs can manage to clamp down a bit more without sacrificing their recent offensive contributions, this team will get a whole lot scarier in the eyes of its opponents.

Hoping to continue riding their hot streak, the Penguins will go on the road to start a brief two-game road stint. They will first face the Florida Panthers on Thursday at 7:30 EST.