Home / NFL / STEELERS / Three up, three down: Steelers vs. Giants 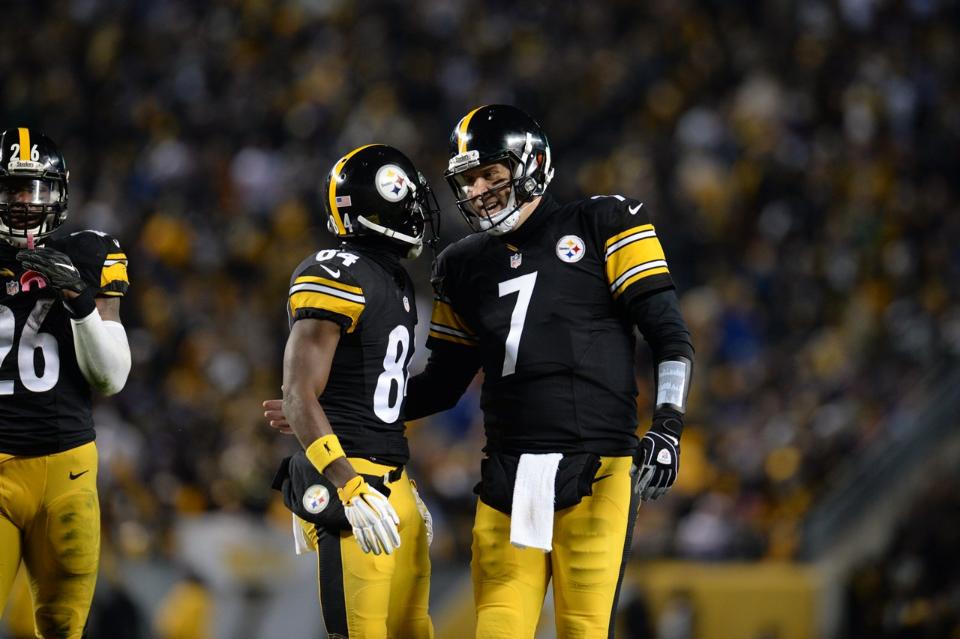 So much for the demise of the Pittsburgh Steelers.

After a rough four-game stretch put the season on the precipice, the Steelers (7-5) put together their third-straight win and thoroughly dominated one of the hottest teams in the league in the New York Giants (8-4) by a final score of 24-14.

The win was paced by a defense that has allowed just four touchdowns over that three game span, and the win put the team in a tie with the Baltimore Ravens for the division lead. With the Buffalo Bills next up on Pittsburgh’s schedule, let’s look at the best and worst from the Steelers’ impressive win over New York.

1. Defense once again does the heavy lifting— When the season began, most believed it would be the offense that would carry the Steelers. Yet, for the third consecutive week, the defense has been the difference, and the group seems to be gaining momentum for the stretch run.

The ageless James Harrison put on a pass rushing clinic, victimizing 22-year old left tackle Ereck Flowers throughout the game. Harrison was just credited with one sack, but he forced a Flowers hold in the endzone that led to a safety. Harrison has been the spark plug for a linebacking unit that had been maligned for much of the early season and that struggled to rush the passer.

Speaking of veteran linebackers, with the Steelers up 5-0 in the second quarter, Lawrence Timmons made a key interception near the Steelers’ goal line to thwart a New York red zone opportunity. Timmons has taken some criticism for his struggles in pass defense, but he looked like a safety on his 58-yard return on the play.

Credit the Steelers’ league-best red zone defense for once again coming up big with two stands deep in Pittsburgh territory, including a fourth-and-one stop for the second consecutive week. The Steelers were able to stop all four fourth down attempts by the Giants — that’s winning defense, folks.

Safety play has been key to Pittsburgh in recent weeks, and the development of rookie Sean Davis has led to an uptick in Mike Mitchell’s play. Davis tied the team lead with seven tackles and added an interception, while Mitchell continued his quality work in pass coverage.

Although star New York receiver Odell Beckham Jr. had 10 catches for 100 yards, it was pretty benign in the big picture — credit to the fine work of both cornerbacks Artie Burns and Ross Cockrell for limiting the damage.

Finally, give Ricardo Mathews credit for filling in for an injured Javon Hargrave, who left the contest early with a concussion. Mathews had a sack and was able to help keep running lanes clogged most of the game. The defensive line without — both Cam Heyward (who is out for the season) and Hargrave — had an excellent showing.

2. Breakout game for Green adds much-needed weapon to passing game— It took longer than expected, but tight end Ladarius Green is starting to show why the Steelers paid him the big bucks in the off-season to replace the retired Heath Miller. Green had a career day and led the offense with six catches for 110 yards and a touchdown.

More importantly, many of Green’s catches were down the middle of the field, something Pittsburgh needs more of down the stretch. Combine Green’s performance with Jesse James’ three catches for 32 yards, and the game showed the Steelers might just have some passing game weapons at the tight end position.

Let’s not forget about Le’Veon Bell, who rushed for 118 yards and added another 64 yards on six catches. Bell has been exceptional and is consistently proving to be the best dual threat back in the league.

3. How about Randy Bullock? Considering kicker Randy Bullock was signed Saturday afternoon after starting kicker Chris Boswell was added to the injury report out of nowhere and that Bullock then proceeded to make three fields goals and his lone extra point, he’s making the list.

Being a kicker is never easy, but coming in off the street to a crucial game at Heinz Field and getting the job done is big time. Who knows how long Boswell will be hampered by his abdominal injury, but, if it does end up being a nagging one, the team looks to have a relatively reliable option in Bullock.

1. Penalties dampen an otherwise outstanding win— Twelve penalties isn’t normally a winning formula, but Pittsburgh was able to overcome a number of silly penalties to get the win. Most frustrating was the four special teams penalties — something that continues to be an issue. Granted, key contributors like Darius Heyward-Bey, Shamarko Thomas and Roosevelt Nix have missed quite a bit of time this season with injuries, but the high-penalty play of the special teams is still a concern.

Guard David DeCastro was called for his 10th penalty of the season on a careless holding call, and he still lacks the dominant consistency you’d expect from an All-Pro. He will certainly need to cut out the unnecessary penalties down the stretch.

2. Early drops hamper passing game— It’s hard to be overly critical considering the end result, but James and Green both had multiple drops on what should have been easy catches. Ben Roethlisberger will need to work out the kinks with both players, as consistency from James and Green could make all the difference on offense.

One has to hope that Heyward-Bey can find his way back from injury and into the lineup soon. Cobi Hamilton and Eli Rogers have shown flashes at wide receiver, but Heyward-Bey seems like a more viable option to parter with Antonio Brown with Martavis Bryant suspended for the season and Markus Wheaton out for the year.

3. Need more from the offensive line— Listen, a win is a win, and when Bell gets 100-plus rushing yards against a stingy Giants defense, it’s hard to criticize the offensive line too much. However, Roethlisberger was sacked twice and was pressured five more times. Part of that is definitely on Roethlisberger for stretching plays, but protecting the franchise QB is a must.

This unit can easily be as good as any in the league, but it needs to be more consistent. If the unit can catch fire and dominate down the stretch, it might push the Steelers to a division title. With matchups against stingy fronts in Buffalo, Baltimore and Cincinnati, it won’t be an easy task.