Home / NHL / Can Crosby finally light the lamp against the Blues?

Penguins captain Sidney Crosby will try to get a monkey off his back, and hopefully lead his team to another victory over a Western Conference foe, when his Penguins take on the St. Louis Blues tonight.

The Blues are the only team that Crosby has never scored against in his 10-year NHL career. In the teams’ first matchup this season, he had an assist, but was a minus-2 two, and couldn’t find the back of the net despite five shots on goal.

The rest of the Penguins haven’t fared much better against St. Louis. In Crosby’s nine games agains the Blues, the Pens are just 3-4-2, but they were able to win in St. Louis in this year’s matchup in late February.

“We just kept it simple,” Crosby said of his team’s play that night. “If you look at that game, we just forechecked really hard, used our speed, and really didn’t complicate things much. With that, we drew some penalties and generated a lot on the power play.” 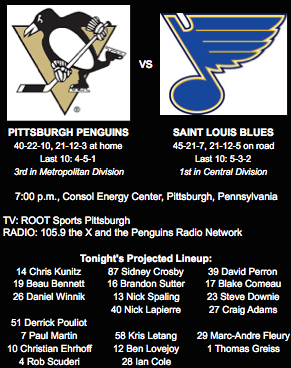 TONIGHT’S OPPONENT: With 97 points – two short of the President’s Trophy leading New York Rangers – the Blues are one of the best teams in the NHL this year. The two biggest contributors to the Blues success this season has been a stifling defense and the breakout of third-year right-winger Vladimir Tarasenko.

Tarasenko, 23, had played 102 NHL games coming into this season – all with the Blues. In those games, he had 29 goals and 33 assists. That’s solid production, to be sure, but the quick-handed Russian always seemed to have more to his game.

This year, he’s found it. Through 73 games, he is fourth in the NHL with 35 goals and tied for sixth with 70 points. His breakout has given the Blues a legitimate offensive star to go along with head coach Ken Hitchcock’s renowned defense.

The Blues have given up just 2.41 goals per game, eighth-best in the league. Even more impressively, they’ve allowed an average of just 27.4 shots per game, second-best in the NHL.

Jake Allen will be making his first career start against the Penguins in goal for the Blues. The 24-year old New Brunswick native was the Blues’ second-round pick in 2008. He saw his first NHL action with 15 games in 2012-13, but he has seen extended playing time this season due to a series of injuries at the position in St. Louis. 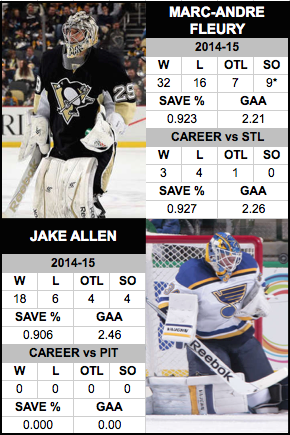 THE 4077: Evgeni Malkin (lower-body) and Patric Hornqvist (upper-body) both skated with strength and conditioning coach Mike Kadar before the Penguins’ morning skate today. Neither will play tonight, but both could return as soon Thursday against Carolina.

Defenseman Christian Ehrhoff, who missed Saturday’s game in Arizona with an injury suffered in warmups, fully participated in practice today and is expected to play.

“He had the skate this morning, and I’ll talk to the trainers,” head coach Mike Johnston said after morning skate. “I’m anticipating that he’ll be able to play.”

UP AND DOWN: The Penguins recalled defenseman Derrick Pouliot from Wilkes-Barre/Scranton of the American Hockey League and re-assigned center Andrew Ebbett to their top farm club.

“We want to see the same game that he played the majority of the time he was here before: that puck movement, quick escape from the zone,” said Johnston of the team’s top defensive prospect.

With Ehrhoff ready to go, Pouliot’s recall means that the Penguins lineup will feature 11 forwards and 7 defensemen tonight.

HAPPY RETURNS: With the Penguins and Blues making a trade making a deal the trade deadline, two players will be playing against their former squads for the first time.

Ian Cole and Robert Bortuzzo, traded for each other, will face the team that drafted them for the first time.

“I woke up a little early,” Cole said. “I was really excited for the game today.”

Despite his excitement, Cole seems well prepared to deal with the emotions of the day.

“Obviously, I have a lot of friends (on the Blues),” he added. “Part of being a professional is being able to curb that, and do your job. That’s the mentality going forward. It’s just another game. Play hard, just like against anyone else.” 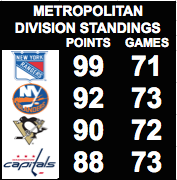 SCOREBOARD WATCHING: The three teams at the top of the Metropolitan Division are all in action tonight, and are all at home against Western Conference opponents. The first-place New York Rangers host the defending Stanley Cup champions, the Los Angeles Kings on NBC Sports Network. The New York Islanders are hosting the red-hot Minnesota Wild.

MINOR MATTERS: Wilkes-Barre/Scranton (37-21-7, 2nd in AHL East) lost 4-3 to Binghamton on Saturday. Jeff Zatkoff gave up four goals on just 23 shots and lost his third straight start. Danny Syvret scored his first goal with the WBS Penguins, Carter Rowney had a goal and an assist and Taylor Chorney had three assists and was a plus-2.

On Sunday, the AHL Penguins blanked the Lehigh Valley Phantoms 3-0. Matt Murray set an AHL rookie record with his 10th shutout of the season. Captain Tom Kostopoulos scored his 15th goal of the year.

The Wheeling Nailers (30-29-2, 4th in ECHL North) lost 2-1 to the Elmira Jackals on Saturday. Chaz Johnson scored the lone goal for the Nailers. On Monday, goaltender Franky Palazzese was called up to Hamilton of the AHL. Palazzese has been hot as of late, with a 6-3-1 record and a 0.947 save percentage in his last 10 games.

#CAWLIDGEHAWKEY: Penn State forward Casey Bailey has chosen to forgo his senior year with the Nittany Lions and has signed a two-year contract with the Toronto Maple Leafs. Bailey will be the first Penn State player to play in the NHL.

Robert Morris forward Scott Jacklin has signed an amateur try-out with the Tulsa Oilers of the ECHL. The senior finished his NCAA career with 48 goals and 59 assists for 107 points in his four seasons with the Colonials.