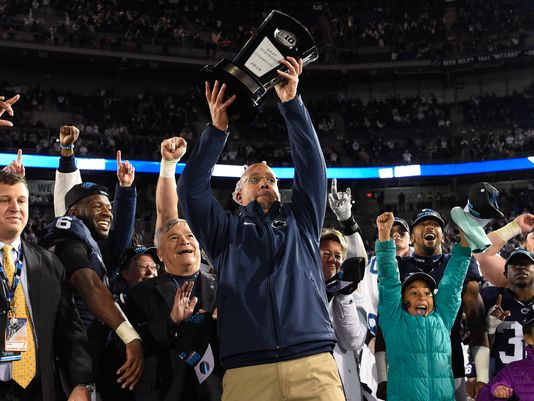 The No. 7 Penn State Nittany Lions (11-2, 9-1 Big Ten) scored 24 points in the second half to catapult themselves to a 38-31 victory over the No. 6 Wisconsin Badgers in the Big Ten Championship on Saturday evening at Lucas Oil Stadium in Indianapolis, IN. Here are the game’s “Cheers and jeers.”

“Splash” plays continue to be successful— While Penn State isn’t known for stellar first halves — and this game was no different — the team was able to capitalize on a few big plays on offense. The first came of the 33-yard variety on a touchdown pass from Trace McSorley to tight end Mike Gesicki that cut the Wisconsin lead to 14. Later, McSorley found Saeed Blacknall for a 40-yard catch-and-run late in the second quarter to keep the Nittany Lions alive and cut the lead down to 14 once again.

To start the second half, McSorley found Blacknall for a 70-yard strike on the first play from scrimmage. DaeSean Hamilton caught a 38-yard pass from McSorley en route to a 115-yard day.

Second half successes continue— When looking up the definition of “second half team,” you’d likely find the team picture of this year’s Nittany Lions. Following a season-long trend, Penn State kept the Badgers within striking-distance in the first half, then came out swinging early and often in the second half.

The Nittany Lions’ defense held up its end of the bargain allowing only three second-half-points, compared to 28 in the first half. Penn State’s offense came out firing in the third quarter, scoring two touchdowns and scoring both a field goal and touchdown in the fourth quarter to overcome a 21-point deficit.

Since playing Indiana, the Nittany Lions have allowed only three points in the second half.

Mistakes in key situations— On a play that was guaranteed to lose yardage on the Badgers’ first drive, linebacker Manny Bowen got flagged for a late hit out of bounds that kept the drive alive for Wisconsin and negated what would have been a 3rd-and-long situation. The Badgers wound up scoring their first of four touchdowns of the half on that drive.

In the second quarter, center Brian Gaia air-mailed a snap beyond a leaping McSorley; the ball wound up in the hands of a Wisconsin defender, who then took the ball into the endzone to put the Badgers up 21-7.

4th down play-calling— Two key 4th down play calls worked out terribly for the Nittany Lions late in the second quarter while trailing by 21 points. Penn State looked to attack the Wisconsin defense in the 3rd-and-short situations, however, both times the play was stuffed before it got started. The missed opportunities helped allow the Badgers to start their drives on average at the 43-yard line.

The highlights of the game come from wide receiver Saeed Blacknall.

Blacknall found the endzone for the first of his two touchdowns with this 40-yard reception from McSorley.

The junior wide-out found his way to the endzone again in the second half on the first play from scrimmage on this 70-yard catch-and-run:

Penn State must now wait until Sunday afternoon to figure out which bowl it will wind up in — or if it wind up in the College Football Playoff. As Big Ten Champion, the Nittany Lions are guaranteed a berth in the Rose Bowl should they not get in to the playoff.