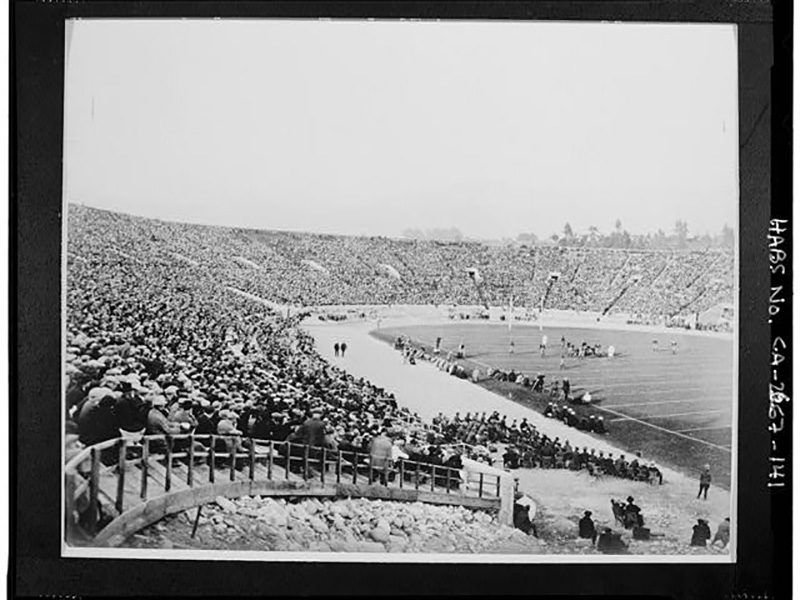 (Photo from: Library of Congress Prints and Photographs Division)

That year, head coach Hugo Bezdek and his Penn State team made it to Pasadena by way of a five-day trip on train, stopping in Chicago and at the Grand Canyon along the way. That five-day train trip is a far cry from the just-over-five-hour flight this year’s edition of the Nittany Lions took Monday.

And, according to game reports, the 1923 game got underway after an hour delay due to traffic delays following the Tournament of Roses Parade — the taxis the Nittany Lions were in got stuck in said delays.

My, how times have changed!

On the field, it was all Trojans following a first-quarter Penn State field goal. USC scored a touchdown in both the second and third quarters to seal the deal. The game ended in complete darkness, and media members had to hold up matches to write their stories.

Collins and Warner put on a show for the nation against the Ducks, culminating in a 38-20 victory that gave Penn State its lone Rose Bowl victory. The 1994 team wound up finishing second in the nation, although some argue that the team should have won the national title instead of Nebraska that season.

The 2009 edition of Penn State and USC in the Rose Bowl was much, much different, however, it still found the Nittany Lions on the losing end of the match-up, 38-24.

In 2009, the Nittany Lions were ranked as high as No. 6 in the nation leading up to their game against the Trojans. Penn State, led by then-head coach Joe Paterno, ran into a Mark Sanchez-led USC team that torched the Nittany Lions’ secondary for 413 yards and four touchdowns.

Penn State was the only team that version of the Trojans gave up more than a touchdown to in the second half as the Nittany Lions scored 17 second-half points. The 2017 version of Penn State football has that same mentality of that second-half Rose Bowl performance as this 2016-17 team capitalized on being a second half team to get them into the Granddaddy of Them All once more.

The Nittany Lions may resemble the 2009 edition via their ability to make a second-half comeback, but the team they’ve been compared to the most has been that 1994 team that played in the 1995 edition of the Rose Bowl.

While the fate of the 2017 Rose Bowl will be settled Monday, the Penn State program is far from a stranger to the pomp and circumstance surrounding this bowl. With a win the Nittany Lions can find themselves in the same category as the marvelous 1994 team: Rose Bowl champions.