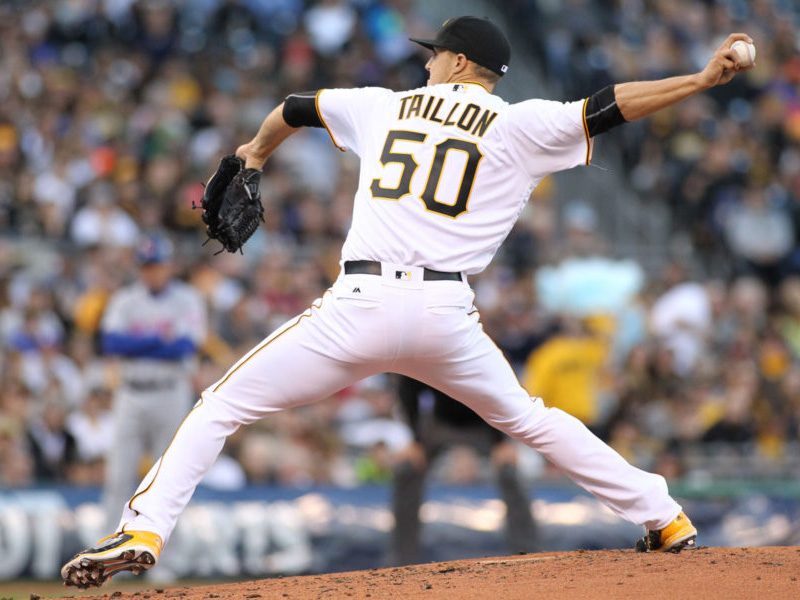 Pirates No. 2 starter Jameson Taillon was stellar in seven innings Wednesday night against the Red Sox. (Photo by: David Hague)

The Pittsburgh Pirates never had a runner in scoring position in Wednesday night’s game — yet it still took 12 innings for the Boston Red Sox to get the 3-0 win.

With one out in the bottom of the 12th, Boston catcher Sandy León drilled a ball 359 feet to deep left center, scoring Jackie Bradley Jr. and Pablo Sandoval, both of whom got on base via walks given up by Pittsburgh reliever Antonio Bastardo.

León made a base running error in the third inning that could have had the game ended sooner: He ran through his third base coach’s stop sign and was thrown out at the plate by Andrew McCutchen. But his crack of the bat in the 12th inning made up for it.

In the 12-inning game, the Pirates only had five hits, and none of them were for extra bases (in part because of the stellar play by the Red Sox’s Andrew Benintendi in left field). But the game really just came down to just one swing of the bat.

In only the second game of the season, the Pirates got to see a gem of a pitching matchup.

Pittsburgh starting pitcher Jameson Taillon and Boston starter Chris Sale were both drafted in the 2010 MLB Draft, Taillon second overall by the Pirates out of high school and Sale 10th overall by the Chicago White Sox out of college.

While Sale’s journey to the big leagues was pretty straight-forward, Taillon’s included injuries and other obstacles. But Wednesday night, as the No. 2 starter in Pittsburgh’s rotation, Taillon showed why all the early hype surrounding him was warranted.

In his seven innings and 95 pitches, he gave up no runs on five hits while striking out six and waking three. He got himself out of a tough jam in the fifth inning — runners on first and third with no outs — by striking out Pablo Sandoval and León back to back and by getting Dustin Pedroia to ground out to end the inning.

McCutchen might not have a batting average yet, but he’s showing his value to the team in other ways: with his glove.

Wednesday against Boston, McCutchen made two phenomenal plays in right field to keep the game scoreless for as long as it was. The first was his spot-on third-inning throw to nail León at the plate, while the second came in the fourth inning when McCutchen, with his back against the right field wall, put the kibosh on Mitch Moreland’s two-run homer bid.

Last season was a rough one defensively for McCutchen in center field; he posted an MLB-worst -28 defensive runs saved. With his play Wednesday, the new right fielder already has +3.

Bastardo might have given up the three-run homer that ended the game, but, other than that blemish, Pittsburgh’s bullpen was nothing short of spectacular. While Tony Watson got into some trouble in the tenth inning — he loaded the bases with two outs before getting Benintendi to hit a chopper to second — the rest of the bullpen was perfect. Daniel Hudson (8th inning), Felipe Rivero (9th) and Juan Nicasio (11th) gave up no hits and no walks.

The Pirates will wrap up the three-game series at Fenway Park on Thursday before returning to PNC Park for Friday’s home opener against the Atlanta Braves.