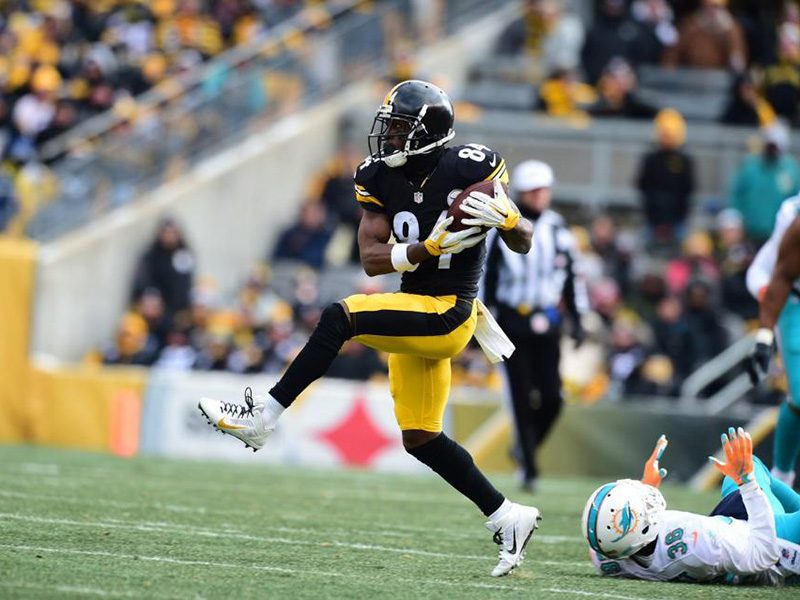 Antonio Brown scored two touchdowns — a 50-yarder and a 62-yarder — in Pittsburgh's 30-12 win over Miami. (Photo by: Pittsburgh Steelers)

A demoralizing October loss to the Miami Dolphins was the start of the Pittsburgh Steelers’ spiral, but, winners of seven-straight, they made sure nothing like that loss — which featured Miami running back Jay Ajayi rushing for over 200 yards — happened again when the two teams met in the first round of the AFC playoffs.

Sunday, Pittsburgh cruised to an almost-too-easy 30-12 victory over the Dolphins — and the Steelers did it in spectacular fashion, with huge contributions from running back Le’Veon Bell and wide receiver Antonio Brown, in particular.

Here are the best tweets from the game.

The Steelers have a fever, and the only prescription is… pic.twitter.com/PrywBv0i76

Ryan Shazier warming up without a shirt on! 😂 #Steelers https://t.co/5GJH8HpqYA

Antonio Brown has three receptions for 119 yards and two touchdowns. At that pace, he’ll finish with more than 1100 yards and 15 TDs

The Steelers have a WR with the patience of a RB, and a RB with the explosiveness of a WR.

Chiefs-Steelers: will be interesting to see how both teams respond to a first-round bye.

It’s gonna be tough for them to get there in the first half, but we’ll see https://t.co/2QDeUjpCyg

BREAKING: The Pittsburgh Steelers are being investigated by PETA for their mistreatment of Dolphins.

Summary of the first quarter. pic.twitter.com/hz0xbPZyE2

So glad I wrote 40 inches on Ajayi today, 17 more inches than he has yards so far.

These two are hoping things keep going the @steelers way in the second half. @TheCUTCH22 @JoeManganiello pic.twitter.com/CH4hDfhakz

Breaking: Miami has already booked a halftime flight back to South Beach.

After seeing this, maybe clipboard holding ain’t such a bad gig after allhttps://t.co/RvuZWmRb9Y

Wow a live look at how Matt Moore is looking at his OL on the sideline pic.twitter.com/gzo3jgQsKQ

You know it’s your day when interceptions turn into completions

Now Harrison celebrates sack by grinding one of his son’s participation trophies into dust.

Go Steelers!!! On another note… I have never been so f***ing cold in all my life… WTF

And I thought it was called the “all hands team” because the players were shaped like giant hands.

Made an agreement with my nephew for each 1st down the steelers got I would do 10 pushups. He did 5 per 1st down Miami got. 190 push-ups inc

Bell: The o-line did an incredible job controlling the line of scrimmage today. Made my job easy. Total team effort.

@Ashlayyyy_ @KoS_Xtreme i would like to remind people that the steelers needed ot to beat the browns pic.twitter.com/xa2GOi1sS6

@NFLonFOX @camdasilva Steelers look unstoppable but aren’t favorites. So that means they’re stoppable. Right? Did I miss something?