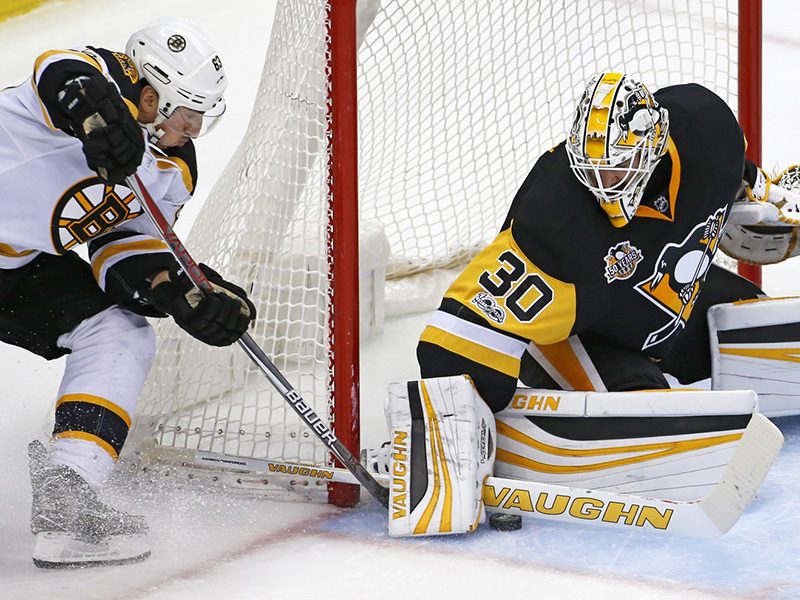 Not too long ago the Pittsburgh Penguins (30-11-5) were on a three-game skid. With its 5-1 win Sunday against the Boston Bruins (23-21-6), Pittsburgh has found itself on a four-game win streak.

This fourth win in a row has helped separate the Penguins from the New York Rangers for third place in the division, and Pittsburgh now only trails the Columbus Blue by a single point for second place (the Washington Capitals are currently in first).

The 5-1 victory Sunday night featured both an explosive offensive in the third period and a stellar game from goalie Matt Murray.

Although the game began with a scoreless first period, Bryan Rust scored just seconds into the second period for his 12th goal of the season. Conor Sheary added to the Penguins’ slim lead halfway through the period with Sidney Crosby getting his second assist of the game.

However, the Bruins didn’t let the score get out of hand at that point, with David Krejci scoring later in the second period to make it a 2-1 game. However, in the third period, Pittsburgh got a goal off the stick of Patric Hornqvist, added Sheary goal and, lastly, wrapped the scoring up with a powerplay goal from Crosby.

While the Penguins went into the final period of play up by just a single goal, the flood of shots and goals in the third period was exactly what the doctor ordered for them to secure their 30th win of the season.

Murray looked like his Stanley Cup-champion self, making 44 saves against a Boston’s offense that actually outshot the Penguins. With the win, Murray has a 17-4-1 record this season; he’s allowed only a single goal in his last three starts.

The last game where he allowed more than a goal was Pittsburgh’s overtime 8-7 win almost a week ago against the Capitals. Murray’s denial of the Bruins handed Boston its fourth straight loss and gave Pittsburgh fans a fun win to watch.

Murray’s opponent in the net, Tuukka Rask, didn’t finish the game and appeared to leave in the second period with an illness. Zane Mclntyre replaced Rask and allowed the three third-period goals on only 14 shots.

It’s been some time since the Penguins have led the Metropolitan Division, but, with their recent winning streak, they’re still in the hunt for second — and even first — place. Although the Capitals are ahead of Pittsburgh by three points, the Penguins has done a good job of rebounding from the three-game losing streak and have positioned themselves well heading into the All-Star break.

If the Penguins can continue to get offensive production from all four lines and both goalies can continue their dominance as of late, Pittsburgh will be a dangerous team in the second half of the season.

The Penguins’ next game will be take place Tuesday against the St. Louis Blues at PPG Paints Arena starting at 7:00 p.m. EST.