As expected, Pitt commit Corey Manigault became the second Panthers recruit to decommit after Pitt hired Kevin Stallings as its new head coach. Manigault follows point guard Justice Kithcart, who also asked for his release from his National Letters of Intent. Manigault, a 6-foot-8 power forward from Fairfax (VA) Paul VI, announced his decision on Twitter. Officially decided to reopen my recruitment — Wop (@CoreyDoeee) March 28, 2016 Maryland, Providence and Temple are among the ... END_OF_DOCUMENT_TOKEN_TO_BE_REPLACED

Pitt fans have had a good 24 hours now to let the hiring of Kevin Stallings sink in and the opinion really hasn't changed as mostly the entire fan base views this as a terrible hire from athletic director Scott Barnes. But what exactly does Stallings bring to the table as a coach? While personally I am not thrilled with the hire, I'm not dead set against it either. Here's a few areas where Stallings will improve the Panthers in quick time. The biggest improvement will be at ... END_OF_DOCUMENT_TOKEN_TO_BE_REPLACED

It didn't take long for new Pitt basketball coach Kevin Stallings to get to work. It also didn't take long for the first incoming player to jump ship. Stallings, who won't be introduced until Monday afternoon, has already offered his first scholarship. Stallings already has reached out to four-star 2017 point guard Aaron Thompson and offered him a scholarship. Thompson, who is a current teammate of 2016 Pitt signee, forward Corey Manigault, is ranked as a four-star prospect by Scout and ... END_OF_DOCUMENT_TOKEN_TO_BE_REPLACED

According to ESPN, Stallings confirmed that he informed his players that he is taking the Pitt job. Stallings led Vanderbilt into the NCAA Tournament, but was defeated by Wichita State in the First Four. There was speculation that Vanderbilt was expected to sever ties with Stallings, but Stallings found another job before that could happen. Barnes reached out to several candidates, but was spurned by the likes of Sean Miller, Archie Miller and former Pitt head coach Ben Howland. Other ... END_OF_DOCUMENT_TOKEN_TO_BE_REPLACED

With the search for Jamie Dixon's replacement already on, here's a look at 10 potential candidates who may be on athletic director Scott Barnes' radar. With Sean Miler already off the list and brother Archie also an extreme long shot, neither are included. The good news for Pitt fans is that Barnes is not just going to settle for anyone. “This is a national job," Barnes said Monday. "The ACC has six teams going to the Sweet 16, most in the history of the NCAA tournament. The platform ... END_OF_DOCUMENT_TOKEN_TO_BE_REPLACED

You can't say Pitt athletic director Scott Barnes isn't proactive. Less than 24 hours after announcing that Jamie Dixon has left the program to take the head coaching job at his alma mater TCU, Barnes reportedly already has an offer on the table for his top candidate. According to KDKA-TV’s Rich Walsh, Arizona head coach Sean Miller has been offered the position. Walsh also notes that there is a 50-50 chance that Miller accepts the position. Despite plenty of previous reports that ... END_OF_DOCUMENT_TOKEN_TO_BE_REPLACED 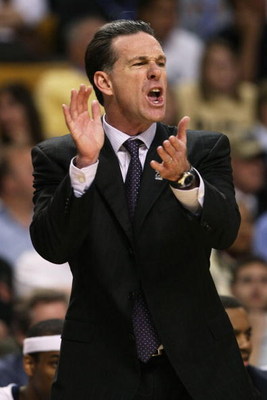 With Monday's news that Jamie Dixon is now the former head coach of the University of Pittsburgh, it brought plenty of emotion from Pitt fans. A lot of that sentiment was negative as many are glad that Dixon is headed to TCU. While it is true that Dixon's teams have underachieved in recent seasons, the reality is that Dixon will be missed at Pitt. Hands down, Dixon is the classiest individual I have ever had the privilege of covering and I wish him nothing but the best at TCU. I for one ... END_OF_DOCUMENT_TOKEN_TO_BE_REPLACED

For the first time in his 13 years as the head basketball coach at Pitt, Jamie Dixon had another job offer he seriously considered. Apparently heading back to his alma mater was enough to lure Dixon away from the place he called home for the last decade plus. Once rumors swirled Sunday about Dixon seriously considering an offer from TCU, it didn't take long for Dixon to accept the position to be the Horned Frogs next head coach. Jon Rothstein of CBS Sports was the first to report that ... END_OF_DOCUMENT_TOKEN_TO_BE_REPLACED

Almost the instant that the Pitt basketball season ends every season, Panthers head coach Jamie Dixon's name is floated around for other job openings. Right on cue Dixon is being linked to an open job and is reportedly considering it. According to Gary Parrish of CBS Sports, Dixon is considering an offer to become the next head coach of TCU, which just happens to be Dixon's alma mater. Dixon, 50, played at TCU from 1984-87. Parish notes that despite Dixon's lucrative contract with ... END_OF_DOCUMENT_TOKEN_TO_BE_REPLACED

The Pittsburgh Panthers will not be continuing their March Madness chase. The team, who were the No. 10 seed in the East, lost to No. 7 Wisconsin, in a tough and close game. The final had Wisconsin narrowly edging out the Panthers 47-43. The low-scoring game had only one Pitt Panther in double digits when it came to final points. Forward Jamel Artis had 13 points while his other teammates had nine points or less, with forward Sheldon Jeter following Artis with nine points. The Panthers had ... END_OF_DOCUMENT_TOKEN_TO_BE_REPLACED