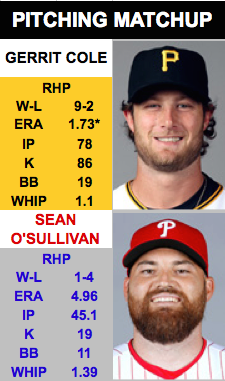 The Pittsburgh Pirates are looking for its fifth series win in the past seven series with a win this afternoon against the Philadelphia Phillies. Friday's night's game was delayed nearly 90 minutes by rain and went to the 13th inning before the Pirates prevailed 1-0. Starling Marte got the game-winning hit, a single which scored Chris Stewart. Today’s starters: The Pirates send Gerrit Cole to the mound to face Sean O'Sullivan. Cole has won his past four starts including a seven-inning ... END_OF_DOCUMENT_TOKEN_TO_BE_REPLACED

Coming into this game the Pittsburgh Pirates were 0-6 in extra innings and had yet to record a walkoff win. Both changed early Saturday morning after a Starling Marte single scored Chris Stewart in the 13th inning. "I don’t know if I’ve been involved in a game of this magnitude to go 13 innings like that," manager Clint Hurdle said. "It was a wonderful game to watch.” Not many fans could have expected a pitcher's duel between Jeff Locke and Kevin Correia but that was exactly what ... END_OF_DOCUMENT_TOKEN_TO_BE_REPLACED

The Pittsburgh Pirates are looking for its third series sweep of the season this afternoon when it takes on the New York Mets. The Pirates were 4-1 and 8-2 winners in games one and two. Today’s starters: The Pirates will send Francisco Liriano [1-4 4.15 ERA] to the mound against Jonathon Niese [3-4 3.72 ERA]. Liriano is 1-0 with a 1.69 ERA in one career start against the Mets. He struck out nine batters in the start over the course of 5.1 innings. He lost his last start against the ... END_OF_DOCUMENT_TOKEN_TO_BE_REPLACED

Being a leader involves many different things namely communication. This has become a key aspect to Sean Rodriguez's game and his transformation has been a benefit to his Pittsburgh Pirates’ teammates. "I don’t know if it’s the Latin in me or just the way my mom raised me," Rodriguez said. "I love communicating with other guys and getting along. Early on in the spring that was probably one of the toughest things for me, just trying to talk to guys and find a way where I could be more of ... END_OF_DOCUMENT_TOKEN_TO_BE_REPLACED 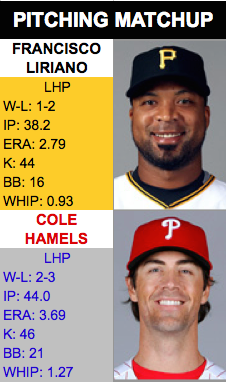 The Pittsburgh Pirates are looking for their second five game winning streak this season which would happen if the team defeats the Philadelphia Phillies tonight. Last night, the Pirates won 7-2 at Citizens Bank Park. Josh Harrison and Andrew McCutchen each hit their third home runs in the victory. McCutchen had not hit a home run in a month, which spanned 98 at-bats. Harrison had gone 62 at-bats without a homer and it was the first three run home run of his career. Tonight’s starters ... END_OF_DOCUMENT_TOKEN_TO_BE_REPLACED

Gregory Polanco had a .170 average batting 15-for-88 against left-handed pitching. That did not matter. “He held his ground, got some good looks, took some pitches," manager Clint Hurdle said. "Basically he got a pitch and just went with it, he didn’t do too much and stayed within himself. It was a really good at-bat.” Polanco's single off Phil Coke provided the go-ahead run in a 5-4 victory against the Chicago Cubs which ensured the Pittsburgh Pirates a series split. “It arguably was ... END_OF_DOCUMENT_TOKEN_TO_BE_REPLACED

Many have wondered which of the Pittsburgh Pirates trio of outfielders is the fastest. It was an idea tossed around at PirateFest, the annual way the team thanks fans for their support, this question was raised and it was split right down the middle. This is a great problem to have as speed and power have led to the discussion that the Pirates outfield is the best in all of Major League Baseball. "We're all out there, speedsters, guys that can run down balls," Andrew McCutchen said to ... END_OF_DOCUMENT_TOKEN_TO_BE_REPLACED

Pittsburgh Pirates fans are very excited about the prospects of the third base position in 2015 as Pedro Alvarez has moved across the diamond. Alvarez played himself off the hot corner with a cold bat and also the most errors in all of Major League Baseball. It became a mental issue and this combined with Josh Harrison's dependability led to a switch. Now Harrison goes into 2015 as the clear starter although Jung-ho Kang and Sean Rodriguez will serve as back ups. Harrison likely will be ... END_OF_DOCUMENT_TOKEN_TO_BE_REPLACED

Francisco Liriano made a strong case to start Opening Day throwing three scoreless innings in a 4-3 Spring Training win Tuesday afternoon against the Tampa Bay Rays. In his three innings of work, Liriano surrendered one hit while striking out four batters. He also registered a single. "I just want to get better each start," Liriano said. "I was pretty happy with what I did today." "He's never going to be a guy who just goes out there to get his work in," Manager Clint Hurdle said. "He's ... END_OF_DOCUMENT_TOKEN_TO_BE_REPLACED

The Pittsburgh Pirates added what could be a nice bench piece on Monday and in the process cut ties with one half of their first base platoon the past couple of seasons. The Bucs have acquired infielder Sean Rodriguez from the Tampa Rays in exchange for a player to be named later and cash considerations. In a corresponding move, first baseman Gaby Sanchez has been designated for assignment to clear roster space. The 29-year old Rodriguez was designated for assignment by the Rays last ... END_OF_DOCUMENT_TOKEN_TO_BE_REPLACED